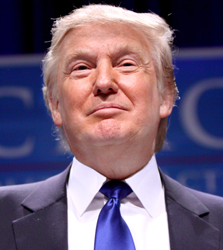 Tonight's debate between Hillary Clinton and Donald Trump will help to frame the election for the last several weeks of the campaign (but probably not determine it, as Mitt Romney learned to his sorrow after outperforming President Obama in the first debate of 2012). The Washington Post offers several things to look for in this evening's clash:

For the past month, Trump has had the longtime anti-Clinton investigator David Bossie at his side, providing him with reams of information about past controversies. And during that period, Trump has mostly focused his Clinton critique on her record in office and inability to fix what he considers the country's chronically broken political and economic system. But more than once, he has delved into the tabloid aspects of Clinton history, such as when he tweeted tauntingly Saturday about inviting Gennifer Flowers, who said she had an affair with Bill Clinton, to the debate.

Monday night will provide a window into the extent to which Bossie is influencing Trump and whether he has internalized his adviser’s opposition research about 1990s-era scandals and more recent issues. Can Trump pack together points on Clinton’s paid speeches to Wall Street firms and her bygone advocacy for trade deals into a populist rebuke? Or does he throw around terms such as “Benghazi” and “her emails” with flair but little elucidation?...

Trump’s challenge will be articulating his jumbled ideology and describing his positions as an overture to voters in the center and on the left who are frustrated with both political parties. If he is unable to do so, he risks being defined solely on Clinton’s terms and as a hard-liner on immigration who speaks in incendiary ways about race and ethnicity. That would be a lost opportunity for Trump's populism-infused campaign.

Clinton’s ideological dance will be similarly complicated, although her challenge will be less about defining herself to the electorate at large than in rousing liberal voters who remain skeptical, notably young voters. Without lurching so far to the left that she loses her appeal to moderates, Clinton will have to convince the backers of Sen. Bernie Sanders (Vt.) and those tempted by third-party candidates that she embodies their desire for advancements on social and economic policy.

There are numerous articles this morning along similar lines (see here, here, and here, for example). There may be a surprise or two this evening, but anybody reading at least a couple of these or similar articles will have a good understanding of what each candidates' opportunities and challenges are heading into tonight's debate.