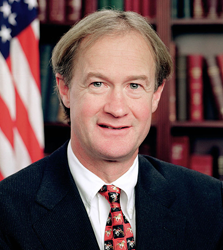 Lincoln Chafee, a former Republican-turned-independent who became a Democrat while he was governor of Rhode Island, is expected  to formally launch his campaign for the Democratic presidential nomination on Wednesday.

Chafee has scheduled an afternoon speech at the George Mason University School of Policy, Government, and International Affairs in Arlington, Va.  A staffer with knowledge of the governor's plans has said he will announce his run during the event.

Chafee, 62, left the governor's mansion in January and announced in April he had formed an exploratory committee. He has said he would focus a presidential campaign on growing the middle class by raising the minimum wage and supporting social programs such as Head Start. He has also indicated he will target primary frontrunner Hillary Clinton on her vote to authorize the Iraq War when they both served in the Senate. The vote, which hurt Clinton in her 2008 bid, raises questions about her judgment, Chafee has said...

The decision to focus on Hillary Clinton's vote on the Iraq war appears to be an attempt to take a page out of the playbook of President Obama's successful nomination fight in 2008. The Washington Post, also reporting on Chafee's pending announcement, notes the candidate's own words from an earlier interview:

Central to Chafee's presidential campaign: his 2002 Senate vote against authorizing the use of military force in Iraq in 2002, when he was the only Republican senator to oppose the measure.

Instability in Iraq has become an unexpected campaign issue in the GOP presidential race. Chafee's hoping it will once again take center stage in the Democratic contest too.

“Don't forget that probably the biggest reason that Senator Obama, at the time, defeated Hillary Clinton in '08 was because of the Iraq war vote. That was the issue,” Chafee told CNN in April. “And that's my big issue here, because we are dealing with [the] ramifications of that huge mistake that Senator Clinton made in 2002, which I did not make, and we live with it today.”

Whether it will work for Chafee the same way it did for Obama is unknown, but he does appear to be the only Democrat directly challenging Clinton on this. More from the Post:

Clinton’s other rivals for the Democratic nomination have so far mostly stopped short of direct attacks on the former secretary of state. Former Maryland governor Martin O’Malley (D), who last week announced his candidacy, has made subtle digs the frontrunner that focus on her perceived coziness with Wall Street and her long history in Washington. Sen. Bernie Sanders (I-Vt.) has staked out populist positions that sometimes fall far to Clinton's left, but takes pains to avoid mentioning her explicitly.

Chafee does not appear concerned with subtlety...

Chafee has a long road ahead of him to even become a viable contender - recent polls put him at 1 percent nationally. But someone is almost certain to emerge as the main challenger to Clinton, and Chafee stands as good a chance as any of the other announced possibilities (Bernie Sanders and Martin O'Malley).