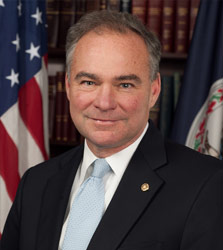 Presumptive Democratic nominee Hillary Clinton will likely unveil her pick for a running mate either today or tomorrow, according to numerous reports. More than half a dozen people have been mentioned in recent days, though Virginia Sen. Tim Kaine is seen by many as the favorite according to many outlets, including CNN:

Hillary Clinton's methodical search for a running mate is complete, Democrats close to the vice presidential process say, and she is planning to make her first appearance with her new partner during a campaign rally in Miami on Saturday....

The focus of her search in the final days centers on Sen. Tim Kaine of Virginia and Agriculture Secretary Tom Vilsack, according to several Democrats close to the process, confident either contender would fit her chief criteria of being a strong governing partner and ready for the presidency.

She had not formally ruled out Labor Secretary Tom Perez, who would be the first Hispanic candidate on the party's ticket, or Sen. Cory Booker of New Jersey, who would be the first black vice presidential nominee. Democrats close to the process said Perez and Booker had considerable strengths, far beyond their diversity, but their limited experience in national security and government made them less likely to be selected.

Clinton needs to navigate internal Democratic politics in her pick, given the strong challenge she faced from Bernie Sanders supporters during the nomination fight. Her pick and the left's reaction to it will likely say a lot about just how much she feels she needs to cater to them with this pick.