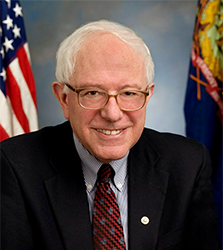 Hillary Clinton has been the presumptive Democratic nominee for some time now, although Vermont Sen. Bernie Sanders has continued his campaign. While he has not officially suspended his campaign, he appeared to throw in the towel yesterday, judging by this NBC News story:

Bernie Sanders Says He Will Vote for Hillary Clinton

Bernie Sanders says that he will vote for Hillary Clinton.

Asked on MSNBC's Morning Joe whether he will vote for Clinton in November, Sanders responded "Yes."

The Vermont senator, who has not yet formally ended his 2016 campaign, said that stopping Donald Trump from becoming president must be an overarching goal.

Sanders also explained that he was maintaining his campaign in order to get "the best platform that we possibly can." While Clinton would probably prefer a straight-up suspension of his campaign, she'll surely take this in the mean time.