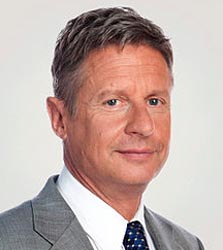 Libertarian, Green candidates poised to make a difference in 2016

With both major parties' likely 2016 nominees struggling against low approval ratings, some are speculating that the presence of third-party candidates might make a difference in this cycle. Few are expecting either the Libertarian or Green party candidates to win, but if one or both of them attract significant numbers of voters that might otherwise vote for the Democratic or Republican nominees, they could tip the election to one or the other.

Gary Johnson might be on the verge of becoming a household name.

At the moment, he’s probably most often confused with that plumber who fixed your running toilet last month or your spouse’s weird friend from work who keeps calling the landline, but he’s neither — he’s the former governor of New Mexico, likely Libertarian candidate for president, and he’s polling at 10 percent in two recently released national polls against Hillary Clinton and Donald Trump....

Given that Trump and Clinton are sporting historically high negative ratings, Johnson’s polling makes a fair bit of sense; Gary Johnson is neither Donald Trump nor Hillary Clinton. He might not win a state, but he could make some noise.

The Green Party candidate, Dr. Jill Stein of Massachusetts, might also influence the race, as The Hill reports:

The Green Party suddenly has a chance to make an impact in the presidential election, with polls showing that Donald Trump and Hillary Clinton are set to be the most unpopular nominees in modern times.

The possibility of disaffected liberals going to a third-party candidate sends a shiver through Democrats — especially those with memories of the 2000 presidential election — even as it delights the Greens and their likely nominee, Jill Stein.

In 2000, votes cast for Green Party nominee Ralph Nader may have swung the outcome of the election to George W. Bush over Al Gore, the Democratic nominee....

...[T]he scars left by the Democratic primary could play to her benefit given that many voters supporting Vermont Sen. Bernie Sanders are resistant to backing Clinton in November.

Additionally, the widespread dissatisfaction with the state of the nation, which has fueled Sanders’s rise on the left and Trump’s on the right, makes it plausible that many voters could rebel against the status quo by voting for a third-party candidate.

Third party candidates face a host of problems, of course -  lack of media attention, ballot access restrictions, and campaign finance laws that limit their ability to bring in money probably topping the list. But in 2016, if Johnson and Stein (or alternate nominees for their respective parties)  grab even four or five percent of the total votes cast, they could be the determining factor in who sits in the White House after President Obama.