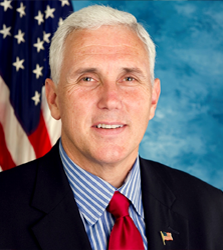 Republican vice presidential nominee Mike Pence was generally judged to have had a better debate last night than Democrat Tim Kaine, though it was hardly a knockout and few expect it to make much difference, at least based on most of the commentary that followed. Here's how Bloomberg Politics described it:

Calm and measured, Pence showed off his preparation for his vice-presidential showdown with Democrat Tim Kaine, fending off a slashing, interrupting opponent. The Indiana governor prepared for the debate “since the night he received the call from Mr. Trump,” a campaign aide told ABC News, enlisting Wisconsin Governor Scott Walker as Kaine’s stand-in during practice sessions last week.

While a marked contrast with Trump’s shaky first debate with Democrat Hillary Clinton, Pence’s steady performance, which came after a dismal week of self-inflicted wounds and flagging poll numbers for the Trump campaign, may not have led the Republican ticket any closer to the White House.

Forty-eight percent of voters who watched said Pence won the debate while 42 percent said Kaine won, a CNN poll found. In an Ohio focus group for CBS News by Republican pollster Frank Luntz, 22 participants said Pence won while just four said Kaine won, though when he asked how many would change their votes as a result, the answer was zero. Pence took up a larger share of the debate conversation than Kaine on Twitter and Facebook, the companies said.

Vice presidential debates rarely have much impact on the overall race, and there seems to be little to suggest last night was any different.