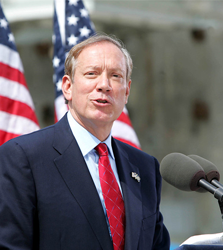 The Republican race for the 2016 presidential nomination got a little more crowded today, with former New York Governor George Pataki jumping in. The Washington Post reports on his announcement today:

Former New York Gov. George E. Pataki -- a moderate Republican who led the state through the aftermath of the Sept. 11, 2001 terrorist attacks -- on Thursday announced a long-shot bid for the presidency.

"America has a big decision to make about who we're going to be and what we're going to stand for. The system is broken. The question is no longer about what our government should do, but what we should do about our government, about our divided union, about our uncertain future," Pataki says in a video released Thursday morning. "...We are all in this together. And let us all understand that what unites us is so much more important than what might seem superficially to divide us."

At the end of the video, which emphasizes his leadership following the 9/11 terrorist attacks, "Pataki for President" flashes across the screen.

Pataki, who has not held elected office since 2007, will formally declare his candidacy at an event in Exeter, N.H. Pataki had already signaled he would run, in an interview earlier this week with the New York Post...

The Post article notes that Pataki's road to the nomination is hampered by two major problems: a lack of name recognition, and moderate views unlikely to find a welcome reception among conservative Republicans.

Now that Pataki has actually entered the race, he must face the harsh reality that flirting had allowed him to avoid. Which is that he has very little chance of winning the GOP nomination.

For one thing, Pataki will enter an already-crowded GOP field without the benefit of name recognition. This January on "Jeopardy," three contestants were shown a photo of Pataki's face -- but none could remember his name. Last month, when he shook hands with patrons in a New Hampshire Chipotle, many said afterward that they had no idea who he was.

And Pataki's moderate record in New York -- strong gun-control laws, an expansion of the state budget -- does not seem well-suited to today's GOP primary voters...

Over at the New York Times, Alexander Burns has an insightful article on what Pataki's path to the nomination might look like:

Mr. Pataki has a niche: He is the only supporter of abortion rights in the Republican field, and its only staunch advocate for gay rights. Whether there is any audience for that message in a G.O.P. presidential contest, however, is unclear. Mr. Pataki’s approach echoes that of the last New York Republican who ran for president, Rudolph W. Giuliani. But Mr. Giuliani failed to patch together an unwieldy coalition of social moderates, fiscal conservatives and national security hawks by pointing to his stewardship of New York City in periods of crisis. Put simply, there’s a reason no one else is competing to be the Giuliani of 2016...

If Mr. Pataki delivers a blunt message to Republicans about the dangers of failing to adapt to an increasingly diverse and socially progressive America, he could have an effect on the continuing struggle over the future of the party. He has told allies that he knows that he is a long shot for the nomination, but that he hopes to elevate the political debate...

Standing out in a crowded field is the first priority for any candidate who isn't already considered a serious contender, and Pataki is a skilled politician with a message distinct on social issues from any of the other candidates that could make him the first choice of Republicans who share his views. Whether he can then add to that base will be what determines whether he remains at the back of the pack or is able to surge into the top tier.