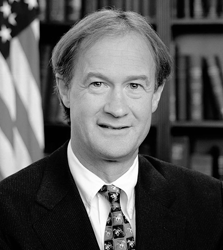 Former Rhode Island Gov. Lincoln Chafee announced this morning that he is ending his pursuit of the Democratic presidential nomination. From CNN:

"As you know I have been campaigning on a platform of Prosperity Through Peace," Chafee said at the DNC's annual Women's Leadership Forum in Washington. "But after much thought I have decided to end my campaign for president today. I would like to take this opportunity one last time to advocate for a chance be given to peace."

The Democrat declared his presidential campaign in June, shortly after announcing that he had formed an exploratory committee.

Chafee never made much headway in his race, trailing badly in fundraising and only rarely even registering in polls. His departure as well as that of former Virginia Sen. Jim Webb, combined with the decision of Vice President Joe Biden not to run, narrows the Democratic field to three: former Secretary of State Hillary Clinton, former Maryland Gov. Martin O’Malley, and Vermont Sen. Bernie Sanders. If nothing else, it gives O’Malley the opportunity to be the sole option for Democrats concerned about the electability of the other two candidates, as well as more time during debates to offer his message.