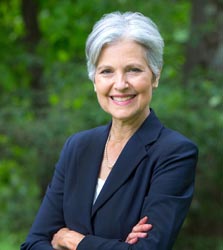 The unusual 2016 campaign has left many Americans searching for an alternative to the Democratic and Republican nominees. While Libertarian Gary Johnson, former governor of New Mexico, has received a fair amount of attention and is consistently polling around ten percent in most polls, less attention has been paid to the other third-party candidate likely to be on most ballots in November. As NBC News explains in a critique this morning, there's a reason she's not getting much attention:

Analysis: Clinton Lucks Out With Jill Stein on Her Left

With polls showing at least some interest in third-party candidates this year, Stein, the Green Party's nominee for president, seems unsure how to speak to anyone this side of Noam Chomsky. Her strategy is heavily dependent on winning over Sanders supporters, and Sanders' playbook is right there for the taking. So far, she's misread it.

That was clear during a hour and half town hall on CNN Wednesday night with Stein and her vice presidential nominee Ajamu Baraka, which was likely the biggest platform the two-time presidential candidate has ever gotten (her campaign sent seven emails promoting it).

Where Sanders was uplifting, with his "America" ad and a slogan that promised "A Future to Believe in," Stein said, "We don't really have a future right now to offer our younger generation."

The conclusion of the piece is not kind:

A stronger third-party challenge on Clinton's left could make the Democratic nominee at least more concerned about her left flank, given the possibly that it could cost her the election, as Ralph Nader did to Al Gore in 2000.

But given her rhetoric and performance Wednesday night, it's understandable why Clinton officials feel comfortable ignoring Stein.

As things stand now, even a stronger Green Party candidate might not make much of difference, as Hillary Clinton is well ahead in most polls. But if things tighten, and Stein continues to impress few, the Democrats may yet thank their lucky stars that no strong challenger emerged on the left after beating back Sen. Bernie Sanders.