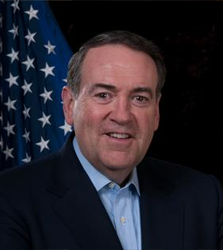 The New York Times has an interesting article today on Mike Huckabee and some of his current income sources, such as an endorsement for an ‘all natural’ diabetes cure.

In a wood-paneled study lined with books and framed family photos, the prospective presidential candidate looks into the camera. “I’m Mike Huckabee,” he says with all the folksy charm that propelled a career as a preacher, politician and broadcaster.

But this is no campaign ad. It is an Internet infomercial for a dubious diabetes treatment, in which Mr. Huckabee, who is contemplating a run for the Republican nomination in 2016, tells viewers to ignore “Big Pharma” and instead points them to a “weird spice, kitchen-cabinet cure,” consisting of dietary supplements.

“Let me tell you, diabetes can be reversed,” Mr. Huckabee says. “I should know because I did it. Today you can, too.”

As Mr. Huckabee, the former Arkansas governor and Fox News host, contemplates jumping into the Republican field, he is haunted by his first presidential try in 2008, when he won the Iowa caucus on a populist wave, but eventually sputtered out largely because of money shortages…

Despite this reference and the headline, there’s really no obvious link to Huckabee’s campaign – the income goes to Huckabee directly, and there’s not even speculation in the article that he might later use it to help self-fund part of his campaign.

Later on the article does offer something relevant to the 2016 campaign, however:

A spokeswoman for Mr. Huckabee… said he had broken off as a spokesman for the diabetes cure a couple of weeks ago, suggesting concerns that the unusual endorsements may appear un-presidential.

Indeed, Mr. Huckabee risks being viewed by voters less as someone who aspires to be seen as presidential timber, than among washed-out candidates of the past, like Bob Dole, who went on to make Viagra ads, and former Senator Fred D. Thompson, who pitches reverse mortgages…

It’s a question worth pondering.