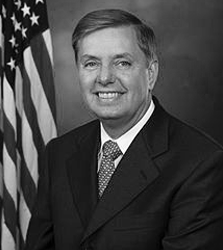 South Carolina Sen. Lindsey Graham’s exit from the 2016 nomination contest could help reshape the Republican race, according to some news reports and analysis. Politico reports on other candidates who are seeking the backing of Graham’s campaign supporters, and the importance of those supporters:

Graham's rivals scramble to scoop up his supporters

Lindsey Graham's departure from the race set off a scramble among his rivals to try to pick up the support of the South Carolina senator and his backers, a valuable commodity given the state's first-in-the-South primary….

Dr. Edward Floyd said he received a call from Jeb Bush on Monday morning and that he extended his support to the former Florida governor. "It never was any question in my mind that if he dropped out that I would go with Bush," Floyd said. Floyd said the call with Bush was brief….

Bush on Monday also claimed the endorsement of former Housing and Urban Development assistant secretary Pam Patenaude, who had been backing Graham.

The article notes that while Graham had little support in the polls, he has a strong backing in his home state, which would be a valuable boost to any candidate when South Carolina heads to the polls following the New Hampshire primary. And according to the article, the establishment-oriented candidates are poised to pick up the bulk of Graham’s South Carolina organization, but it could be a while:

Wallace Cheves, managing partner of Sky Boat Gaming and a co-chair of Graham’s South Carolina effort, said the senator’s local team is intensely loyal to him and will likely await his signal before endorsing another candidate….

Cheves said Graham’s South Carolina supporters are “constantly” in touch with his campaign but haven’t yet set another date to talk. But he predicted that Graham will make a new choice well ahead of a Jan. 14 GOP primary debate that will take place in North Charleston.

Graham's support for a GOP presidential candidate, [former South Carolina Republican Party chairman Barry] Wynn stressed repeatedly, may not seem that profitable nationally but in the state it's undeniable. "He could have a huge impact here," he said.

Alex Rogers of National Journal has a similar piece suggesting Graham could “play kingmaker” in the South Carolina primary:

The ques­tion now re­mains what he’ll do and where his sup­port will go. Since he entered the race in June, Gra­ham fre­quently at­tacked Don­ald Trump over his nat­iv­ist, ban-the-Muslims rhet­or­ic, as well as any can­did­ate who didn’t pur­port hawk­ish for­eign policy views, wheth­er it be Rand Paul or Ted Cruz. In just the last week, he lumped both Cruz and Paul to­geth­er as “isol­a­tion­ists” and labeled Cruz, who has at­temp­ted to po­s­i­tion him­self between Gra­ham and Paul, as a “drunk driver go­ing from one lane to the oth­er.” It’s pretty clear Gra­ham won’t be sup­port­ing any of those three can­did­ates.

Gra­ham’s sup­port then could go to Sen. Marco Ru­bio of Flor­ida, Ohio Gov. John Kasich, or even New Jer­sey Gov. Chris Christie, who has ad­op­ted Gra­ham’s ap­proach of talk­ing tough and mak­ing New Hamp­shire a second home. He could also join some senior mem­bers of his team who will now sup­port Jeb Bush; Gra­ham na­tion­al fin­ance com­mit­tee chair­man Dav­id Wilkins told me earli­er this year that he would sup­port Jeb if Gra­ham wer­en’t in the race. Wilkins, who served as am­bas­sad­or to Canada un­der George W. Bush, wouldn’t com­ment about that on Monday, but an­oth­er mem­ber of Gra­ham’s na­tion­al fin­ance com­mit­tee, Ed­ward Floyd, said there was no doubt he would be a Bush donor.

Graham’s departure could prove to be more meaningful to the race than the other early exits from the GOP field. Jindal and Perry had little support and their home-state organizations didn’t look to be much of a factor. Walker had somewhat more impact at the time of his exit given his support in the polls and strong position in Iowa, but he left so early in the race that his supporters and organization were quickly absorbed by others while the first voting remained months in the future. Graham leaves at a time close to the first votes and still remains a formidable force in South Carolina, which will likely help further narrow the field following New Hampshire. By leaving now, Graham could be a major factor in determining who goes on after his home state’s primary and who is forced to call it quits.